Not the best start...

Seeing a story come done my timeline i admit i chuckled, The BBC report a little cock-up at the Olympics :


"The North Korean women's football team have walked off the pitch at their Olympic match in Glasgow after their images were shown on a screen beside a South Korean flag.
Kick-off was scheduled for 19:45 BST. The game started over an hour late.
North Korea are playing Colombia in the second of the Olympic matches being held at Glasgow's Hampden stadium.
Games organisers in London have apologised to North Korean officials for the mistake.
The error occurred when a video package was being shown ahead of kick-off, with the North Koreans noticing that their faces were being pictured alongside the South Korean flag.
The squad walked off and could only be persuaded to return when the teams were announced again with each player's face displayed next to the North Korean flag." 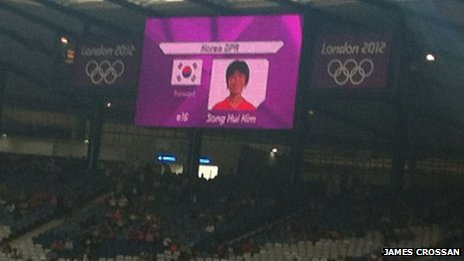 I am sure a Judge-led inquiry will take place soon ;)