With Endorsements From These Mr Cruddas....

KT has just come across this story about the GMB union :

" LONDON - One of the UK’s largest trade unions is to ban its members from visiting Israel and the Palestinian territories on delegations organized by the Trade Union Friends of Israel (TUFI), a London-based organization supporting cooperation between Israeli and Palestinian workers."

Readers will remember that KT wrote about the GMB`s two faces on Council tax freeze : 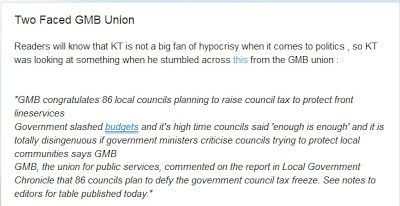 I used in that piece a leaflet from Labour MP Jon Cruddas that was endorsed by the GMB union : 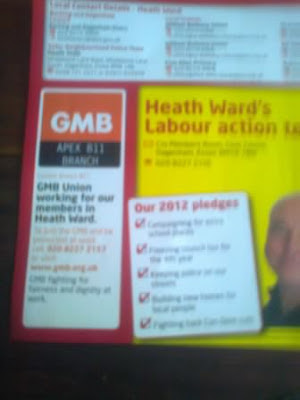 The JPost then say this about the motion and the person who tabled it :

"The controversial motion was submitted by Julie Hunt, from the northwest London branch of the GMB. Last year she was a signatory of a letter that called “to break all links with the Histadrut as it is not a trade union, but has been an integral part of the racist Zionist state since its inception.”

But this did not go down well with Trades Union Friends Of Israel :

“It’s important that British trade unionists visit the region and meet with trade unionists on both sides, supporting cooperation between Israeli and Palestinian workers, helping them to realize their hopes for a peaceful and better future,” said Stephen Scott, director of TUFI, on Friday."

KT would ask Mr Cruddas if these are the type of people he wants endorsing him on leaflets and if so does he share their views?