The houses of parliament and its inhabitants are rightly mocked by left and right for being two faced, so it is news when consistency is shown. 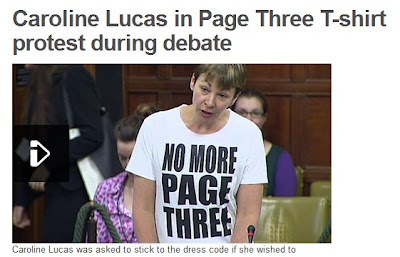 "Green MP Caroline Lucas has been told to cover up a T-shirt displaying the slogan "No More Page Three" in large lettering during a Commons debate.
She wore the white T-shirt at the start of a debate on media sexism.
Chairman of the session, Labour's Jimmy Hood, interrupted her and told her to "put her jacket back on" and comply with Westminster's dress code."

Now lets rewind a couple of years to this Tory MP :

For once we should celebrate and applaud Parliament for being consistent!

Update : Maybe not, this photo shows Caroline Lucas in the chamber for pmqs
It was too good to be true......
Posted by Billy Bowden at 17:04