With public spending being cut and rises in taxes (VAT) the taxpayer is trying to support the spendaholics in Westminster`s addiction to spending our money.

Well according to Sky their Lordships wanna spend 100k on doing up their bogs!


"Taxpayers will fund a refurbishment of two toilets used by peers and VIP guests at the Palace of Westminster - at an "eye-watering" cost of up to £100,000.
The men's and women's lavatories in the House of Lords are in "unacceptable condition for the high profile area they are in", according to an advert inviting contractors to bid for the work.
The rooms are not the only toilets in the building and are not particularly big, with one cubicle and two urinals in the men's toilets and one cubicle plus a in the women's."

From golden handshakes to a golden pisstake , have our masters no shame? 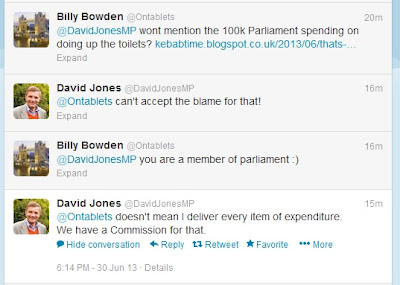 @Ontablets and I must say the old ones were long overdue for renewal.
— David Jones (@DavidJonesMP) June 30, 2013

From the 5 million they spend on subsidized bars and resteraunts to 100k doing up the toilets, their is no austerity in Parliament!
Posted by Billy Bowden at 18:03