KT having a read thro some stuff last night after QT when he came across this story by Ken Loach : 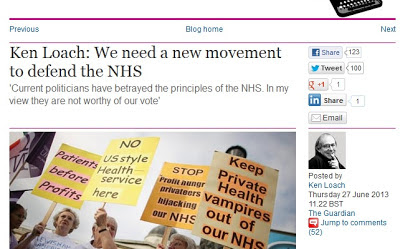 In the piece he says :

"In order to fight back, we need to understand the reasons for the attack on the NHS. This is an ideological issue. If it were simply a matter of finance, there are solutions to hand. There are billions of pounds in unpaid and uncollected taxes. Trillions, we are told, are kept offshore, beyond the reach of national governments. The wealth that is created by the work of ordinary people is siphoned off so that it cannot be used for the common good. If the political will to sustain a publicly funded health service existed, a way would be found."

But then KT nearly sprayed his screen when he came to this part :


"If ever there were a time for there to be a broadly based movement, democratic and principled, that stood for the interests of the people against the demands of business and the politicians who speak for them, that moment is now."

Principled like moaning about tax avoidance in a tax avoiding media outlet? Champagne Socialism at its finest!