As the days pass my despair at the silence from the left over this is astounding, I have heard nowt, nothing, not a peep, remember when phone hacking kicked off they were forever on the tele-box/radio demanding this , demanding that. They were that outraged that one of them attacked an 80 year old man


But on the BBC its silence , i had a look to see if i could find any press release from UKUncut, after all the BBC had been accused of tax avoidance 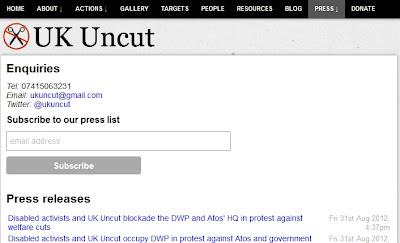 The last press release ent out on the last day of August (Maybe they have finally run out of other peoples money) , i have seen no protests, no hounding of BBC execs or even a campaign to close the BBC.

If you were disgusted by the actions that went on at Murdoch media outlets you can protest by not buying those products (to be fair other papers were involved as well) . And this is where the imbalance lies, If i cancel my sky subscription that is it, end of the matter, however if i stop paying the BBC they will harass me, demand that i pay and they even have the power to take me to court!

And of course there is a chance that the BBC will make settlements to the victims using money via license  fee that we all aare forced to pay, I am not saying that the victims should not receive composition i am saying why should us plebs pay for it when those that responsible for this wont have to pay.

I think its time for a mass boycott of the BBC, I think it is the only way as a country we can hold them to account, we have seen that the recent investigation into MPs expenses was a whitewash ( yes we got a few token prosercutions ) .

The BBC is a public service broadcaster, it did not serve the public when some of the most vulnerable children in society were sexually abused while the BBC had a duty of care

While Labour and the left stay silent on this i believe it is time for the decent people of this country to stand together and show the BBC how disgusted and sick we the license fee payer are with the actions of "Auntie", i suggest its time for a boycott!