Yesterday we got the news about fares increase on trains

"Rail fares for season ticket holders have increased by an average of 4.2% as the annual price hike, announced in August, comes into effect.
Overall, ticket prices have gone up by 3.9% in England, Wales and Scotland, but rises vary between train operators."

The minister who had to tour the studios and spout the government line was Norman Baker (Lib Dem) , As this blog reported yesterday Nick Clegg is being ignored by not only rank and file Lib Dems, but by the Lib Dems deputy leader Simon Hughes, well it seems as if My Baker is another one who ignores the DPM 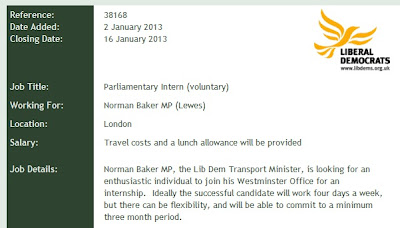 The only silver lining to this cloud is that the unpaid intern will not be affected by the fares increase working for nothing for a Government minister.......
Posted by Billy Bowden at 11:36