The Curse Of The Prime Minister

I am not sure if you all will be aware, but Bradford City had a good result in the first leg of their semi final 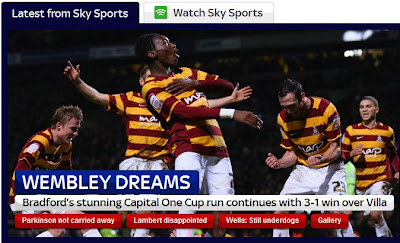 I am a football fan have noticed that Villa have had a rough few seasons, at this stage in 08/09 season they were sitting nice

A year later down at 7th

And then, slipping a bit..

But, a year later they were a place better off

Now, I am not one of those to be a conspiracy loon, but Villas downward spiral coincided at the same time one of their fans took office, and that fan is the current Prime Minister.....

I also had a look at Mr Cameron`s Twitter feed and could not find any mention of Aston Villa...

KT is not a betting person but if i did bet i would put £1 on Bradford to reach the final ;)