He got some backlash last night for saying this , but now seems to try and row back on it.....

The European Free Alliance brings together the parties that are the recipients of racist votes. The Rotherham UKIP MEP is close to them.
— Chris Davies (@ChrisDaviesMEP) January 15, 2013

If UKIP doesn't want to be thought of as linked to racist parties then Nigel Farage should expel Rotherham MEP Godfrey Bloom.
— Chris Davies (@ChrisDaviesMEP) January 15, 2013 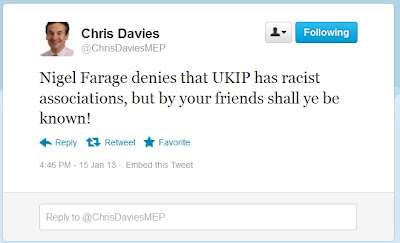 This is a guess, but i have a feeling this may come back to bit him on the bum.