Yesterday Was A Good Day To Bury Bad News

While the debate in MSM yesterday was mainly covered by the ongoing tributes to Baroness Thatcher ( and the odd rant ) , KT`s eyes was drawn towards an exchange between respected blogger/writer Dan Hodges and Labour PPC Jessica Asato 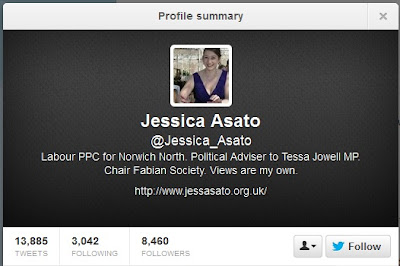 Some readers may not know that the SWP (Socialist Workers Party) have been embroiled in a "rape cover up " scandal : 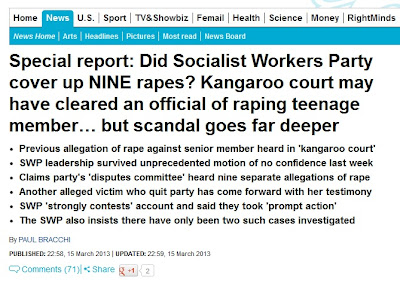 Now that is pretty serious and shocking if true, In fact i would distance myself from them (if i was linked in anyway with the SWP) straight away until the truth is known, But not all see it that way, Dan Hodges confirms that PPC Jessica Asato would work with the SWP on campaigns.

For the record @jessica_asato has said "Yes" she would work with the SWP on a campaign like the Bedroom Tax.
— Dan Hodges (@DPJHodges) April 10, 2013


Now lets just put to one side that the *Bedroom Tax* was introduced by Labour ( we have done that debate) , By giving the SWP the legitimacy of working with the Labour Party they are showing nothing but contempt for the victims of "rape" in the SWP and sending a wider message that "Rape is OK as long as you help with our bedroom tax campaign ", You would think after the BBC scandal of Jimmy Savile sex abuse and pedophilia and various allegations (see google)  against former politicians and state run care homes political parties would want to get the truth out and have a "deep clean" , but no, to Labour and the left the ends must justify the means, to them the "bedroom tax" campaigns are more important than rape victims and justice.

For the Labour party to put political campaigns above victims of rape is a low that KT thought they would never do, KT was wrong.