The BBC is not fit to be a public service broadcaster

As you know i have written recently about the scandal engulfing the BBC, i am shocked and disgusted by the lack of outrage. I bring you this clip from Question Time last night and i urge you to listen to the whole clip and to listen to what Janet Street Porter says


The first small point i want to make is that i was stunned that the question was allowed in the first place, so that is to the BBC credit, but that is as far as it goes.

Janet Street Porter says at 4 mins 10 secs that the BBC did know about what was going on and that it was not just rumors, that to me is a very serious charge and one i believe to made with knowledge and honesty.

The BBC and those that have assisted in this cover up have failed young people, ruined lives and have now totally lost any credibility to be a trusted news reporter or even a public service broadcaster.

Tim, you can always cancel you Sky subscription if you are that unhappy.

In a free market you make your choice by choosing to purchase one product or another, you can also protest by cancelling subscriptions to stuff that disgust you, well not in this case. I personally do not want to pay another penny to a public service broadcaster that has covered up child sex abuse, but what happens if i stop payment to BBC ? the BBC will take me to court, do you know how sick this makes me feel, if i want to avoid a court date i have to pay money to a corporation that covered up child sex abuse! 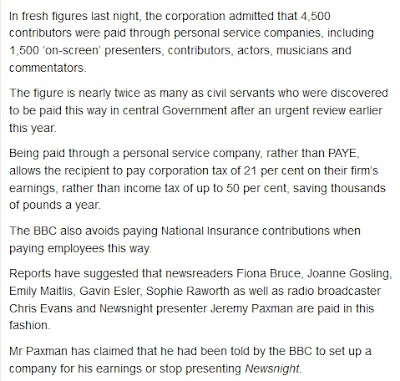 Now, i have no problem with anyone avoiding tax, in fact i encourage it, but i am not a public service broadcaster, but how unbiased can the BBC be when it comes to reporting on tax avoidance, can it be objective on the subject and should it disclose every time they run a report on a politician or party donor that may use tax avoidance schemes that the BBC itself does as well?

The BBC has lost all credibility and moral authority after these latest revelations, If phone hacking closed down the NOTW then covering up child sex abuse should close down the BBC or at the very least it should be made voluntary subscription so people can choose whether to pay money to a corporation the covered up child sex abuse!

I lay this challenge to the BBC, if you think Janet Street Porter is lying then sue her!

Video via liarpoliticians
Screengrab of Tim Farron tweet via blottr
Posted by Billy Bowden at 16:38