We all know that Labour and their supporters troll blogs and spout the party line, the first is tweet sent by Labour press team


.@chukaumunna: Damning that Heseltine thinks that after 2 years the Government does not have a long term growth strategy
— Labour Press Team (@labourpress) October 31, 2012 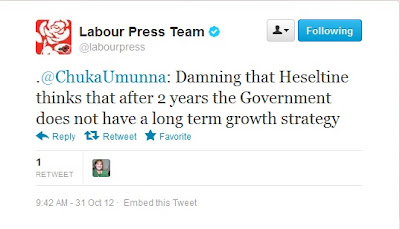 That was posted on Guido Fawkes just two minutes later, a coincidence?

(Must be noted that it is also easy to sockpuppet on Guido Fawkes site)
Posted by Billy Bowden at 09:10