KT was not going to blog about this again but feels he has to, As readers will know KT can be a bit of a stickler for manners, I mean they dont cost nowt and only take a second, readers will also know that liarpoliticians does political video clips for this site and clips that are used on other sites, seeing as Liarpoliticans does not charge for the service I think the least you can do is hat-tip him on blog post, I always do it for clips i use of him, well it seems that ConHome think that a small thing like a hat-tip dont matter, see this post today :

I also tweeted them when they first published blog

Having no luck with that i then tweeted Tim Montgomerie with whom i had exchanged tweets ( polite) about this before and Tim agreed that a hat-tip was the right thing to do, unfortunately i had forgot that Tim had left Con Home however he said he would pass on the message


KT was grateful of this but checking back at 2145 hours ( time i am typing this post ) a hat-tip has still not been added.

Surely it cannot be to hard to ask "Is this our video and if not whose is it so we can hat-tip them?" , bad manners like this reflect badly not only on Con Home but also on the Conservative party and also set a bad example for the young people in society! 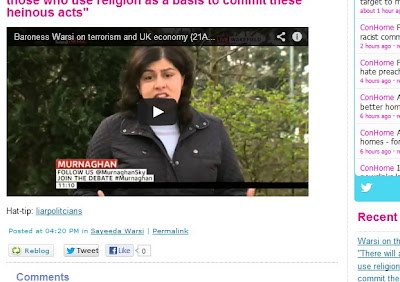 All is well again :)