Prisoner votes and freedom of speech

So, Mps are debating whether prisoners should get the vote ( again) and it seems that they are united that they shouldnt, in fact for a change they are in tune with the majority of public opinion, i say majority because i do not agree with them and here i will set out why.

I believe that you can only have democracy if you have freedom, freedom of speech and expression, that means some people will say and/or express things that some of us will dislike, lets look at a few examples from this country (UK) :

The first is this , a man jailed for wearing an "offensive" T-shirt


"Barry Thew “paraded” through his home town in a white T-shirt bearing the handwritten slogans "One less pig; perfect justice" and "Killacopforfun.com haha".
He made the statement just three hours after PCs Nicola Hughes and Fiona Bone died in a gun and grenade attack less than 20 miles away on the other side of Manchester.
Police welcomed the prison term handed down to Thew, a serial offender who was given a further four months for breaching the terms of an earlier sentence.
Inspector Bryn Williams, of the Radcliffe Neighbourhood Policing Team, said: “While officers on the ground were just learning of and trying to come to terms with the devastating news that two colleagues had been murdered, Thew thought nothing of going out in public with a T-shirt daubed with appalling handwritten comments on.
“Thankfully the overwhelming response from the public - who have inundated us with messages of support and condolence - prove that Thew is the exception and not the rule and our communities were right behind us at our darkest hour." 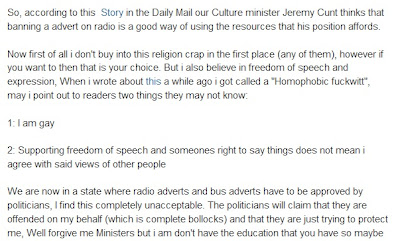 If we can not have an open and honest debate about any subject without the risk of imprisonment or being silenced then we cannot have a democracy, One the second example i have blogged before about my views on it, in fact i even ( thanks to Iain Dale ) blogged a simple post about a little while ago

A state that chooses to use its power by silencing one side of the debate is not a free state, do i disagree with those that oppose same sex marriage? Yes, do i want them silenced ? No, If we are to carry the public with us on this then both sides should be allowed equal chance to make their case.

And then back to the first example, jailed for wearing an "offensive" t-shirt, seriously, the fact we even need to debate/blog/talk about it shows how fucked up we are, was it bad taste? yes , in fact a lot of what is worn/said/expressed can fall under this description ( depending on your point of view) , I mock religions and their "Sky fairies" and i am sure that some people that read my comments could believe that they are bad taste, equally when the Pope says gays are not "fully developed" i could say the same.

I have tried to avoid using the word "offensive" (unless in quotation marks) for a reason, i learned a while ago that offense cannot be given, it can only be taken and this is why we are in the mess, what one judge may find "offensive" another may not, but this is not about judges, its about those that makes these stupid laws, yes, the politicians, the same politicians that want to ignore a court ( that they signed upto) ruling because it suits them, we either follow the rule of law ( including to courts that we have signed upto) or we become a country were laws a made by the mob mentality.

Some may say this post is more about freedom of speech and expression and nothing to do with prisoner votes, i disagree, when the state can silence you or jail you for views that it finds *offensive* then that is not freedom or democracy, how long before we jail political opponents for having *offensive* views?

The last small point i wish to make on this is that why are we so concerned about this? Crook voting for crooks, if crooks are in parliament then why not allow other crooks to vote for them?

Of course the easy option is that everyone stops getting offended.
Posted by Billy Bowden at 16:03