KT has been away from the keyboard for a few days, however KT has been tryin to keep up with the news.

Now KT can be a bit of a cynic sometimes, so when KT checked the list of MP`s that voted for it and against it KT was shocked! The Peoples Pledge claim that Jon Cruddas voted no to a referendum :


"Finally, these MPs have said that they support an EU referendum but voted against a bill providing for that referendum being brought forward in this session of parliament. Presuming that they have not gone back on their previous support for an EU referendum – expressed, amongst other places, in videos shown on the People’s Pledge website (links below) – perhaps they objected to the timing of the Bill suggested by this amendment? If you are a constituent of one of the MPs below, please contact them to find out why they voted against this amendment and to encourage them to support the forthcoming EU Referendum Bill:
6 Labour: David Crausby (Bolton North East), Jon Cruddas (Dagenham & Rainham), Jim Fitzpatrick (Poplar & Limehouse), Tom Harris (Glasgow South), George Howarth (Knowsley), Gerry Sutcliffe (Bradford South)."


KT is shocked to see the MP for Dagenham & Rainham on the list, I mean it was only last June that KT reported these words from the same Jon Cruddas :


"He cannot give away details of policy, but his broad thinking is radical. He wants to look at the idea of appointing union officials to company boards. He wants to plug the public into the debate on Europe by offering an "in/out" referendum once the shape of the new European Union is known. He wants to reform public services where necessary, but only where that will enhance their role, not as a means of shrinking them and hiving them off in parts to the private sector. 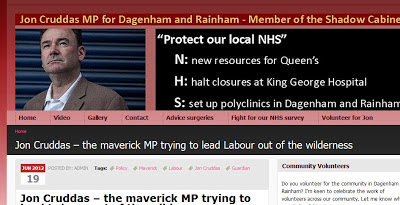 Then again when his leaflets are endorsed by the two faced GMB union should we be surprised........

Just a note, KT has defended Mr Cruddas before but learning of this KT can only conclude that Mr Cruddas is just the same as the other politicians, two faced!