We can trust elected officials to tell the truth right ( so we are told), but as you know KT can be a bit cynical sometimes so when KT saw this tweet it rang a bell :

Whats Osborne got to celebrate and who's paying for the Moet? twitter.com/JohnEdwards33/…
— Cllr John Edwards (@JohnEdwards33) May 5, 2013


As readers can see the tweet is dated 5th of may (yesterday) , now before i go any further i would like to point this out : 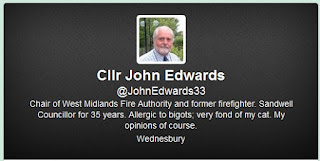 John Edwards is the chair of West Midlands Fire authority so his tweets will carry meaning and authority to some of his followers, however on this occasion he has lied, KT said it rang a bell earlier and this is why, A little while ago another politician tweeted that picture (link via crashbangwallace )

As Crash Bang Wallace point out :


"Unfortunately for Prezza, that photo – much used by the lefty twitterati in recent months – is from September 2004, as reported here.
That means the bubbly was being delivered not to George Osborne or his Coalition colleagues but to Gordon Brown, at a time when John Prescott was Deputy Prime Minister. Either Prezza knows the photo is from the wrong administration and is deliberately misleading his 167,000 Twitter followers, or he has mistakenly picked it up from somewhere else."