So Scrapbook run this story : 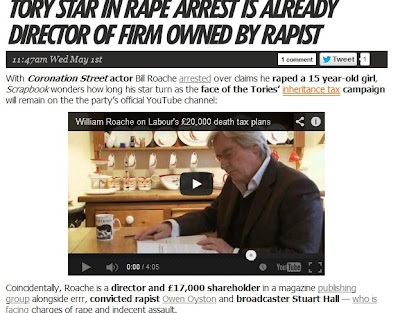 PSbook makes sure that Tory and rape are linked, but what Psbook doesnt tell you is this :

"A convicted rapist who attended a lavish Labour Party fundraising event was personally invited by a former Government Minister and a top football manager.
Millionaire businessman Owen Oyston, 73, sparked a storm of criticism by appearing at the dinner at Wembley Stadium earlier this month."

The Minister was Richard Caborn and the Manager was Labour supporter Sir Alex Ferguson, but that is not all

" Oyston once owned a chain of radio stations and the rights to the Miss World contest. He was a major Labour benefactor in the early Nineties, making three gifts totalling £15,750 between 1992 and 1994."

Oh he is a labour party donor as well!

Surely for the sake of honest reporting PSbook should have pointed out the links between labour and Oyston as well?
Posted by Billy Bowden at 12:24