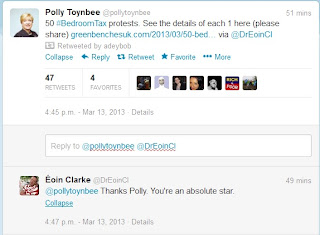 Anyway, as with most lefties you always have to search to find that few years ago they held a different view, well this time is not quite that :

"But the coalition prefers a simple axe. From April, rents will only be paid at 30% of the local average and capped at £400 for a four-bed and £250 for a one-bed home. That limit means all housing benefit families in private property will be evicted from central London: even in outer London the cap will not cover their rent. Anyone out of work for over a year will lose another 10% in housing benefit on top, and at the same time the value of housing benefit will fall every year, only rising by CPI inflation: over the last decade when rents rose by 65%, CPI only rose 17%. What will be the net effect? A mass exodus of the poor, those in work as well as the unemployed, the disabled along with pensioners who form 20% of those on housing benefit – all abruptly ejected from their homes, forced to move to the lowest rent, poorest zones all over the country. This is social cleansing on an epic scale."

That quote is from a piece in the Guardian in 2010 (July) , Now the coalition had only been in power a few months, except Polly mislead the readers of the Guardian, a few days ago i done a piece on the Local Housing Allowance and put up some of the details set out in the 2008 rules but here is one i did not put up

So does that mean Polly is actually saying labour are guilty of social cleansing then?
Posted by Billy Bowden at 17:56