Not so honest Ed!


Has Ed Miliband learned the lesson from Nick and not promising stuff he cant deliver? 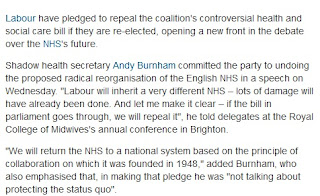 That was from the Guardian just under 12 months ago, so was Andy Burnham lying then?


For those who've asked - yes, the next Labour government will repeal this awful, unwanted Bill.
— Labour's Health Team (@LabourHealth) February 25, 2012


I think this is going to rumble on.

Well Comrade Jones has had his say