Readers will know that KT had taken some time of blogging due to health problems, KT had tried to kill himself which he blogged about before Christmas, readers wont know that he tried again after Christmas, so since then KT had taken things slowly to make sure he didnt rush back and end up attempting a third time.

Well a few days ago KT got into a debate with warrsouthlabour over tax rates and the bank bailout, As you will see KT was polite in the debate and responded to the points raised by Warrington South Labour with facts on tax and an opinion on the bank bailout : 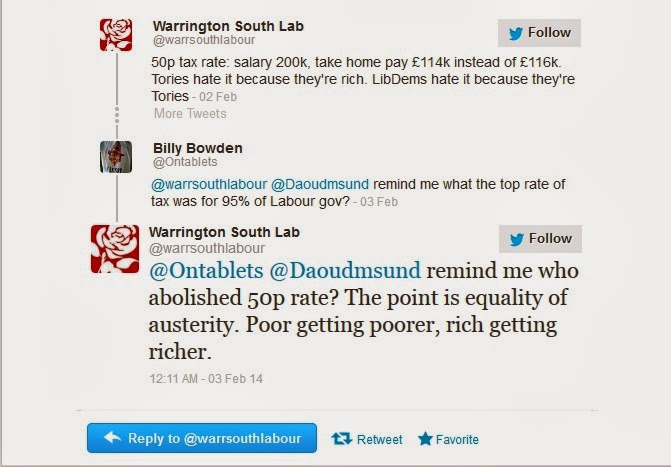 So KT then inquired whether they thought the Labour Government (with the help of the Tories) bailing out the banks was fair : 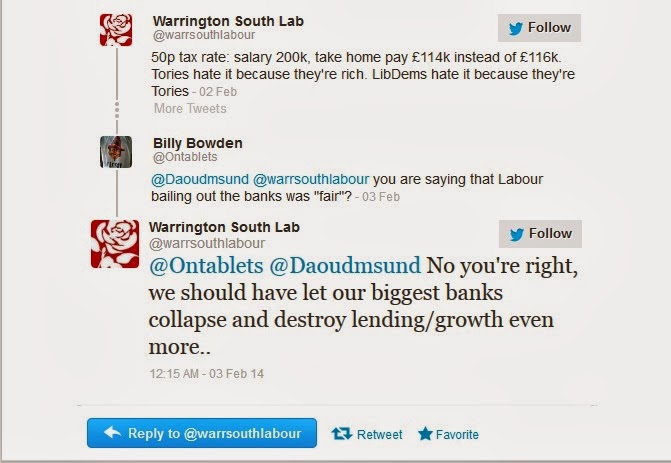 Now these banks had been under Gordon Browns regulation (FSA) and they failed on his watch so KT was not surprised that the Labour party defended the bailout (they had been in the banks pocket for years after all) .

Then KT pointed out that the then Labour Chancellor had said that if labour were returned to power he would have to make "Cuts deeper than Thatcher" : 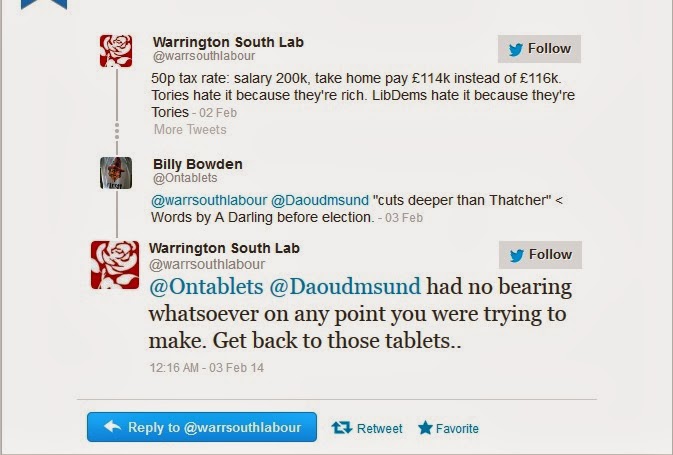 In the first exchange Warrington South Labour mentioned "Austerity" so it was a valid point, but the response by Warrington South Labour that i should "Get back to those tablets" was totally uncalled for, I had merely opposed the bank bailout, Yes KT was mocked for opposing taxpayers money be given to the banks that had failed under Labours watch and Labours regulation.

KT will also say that no-one he knows dreams of a lifetime on medication, If KT does not take his tablets then the chance of another suicide attempt increases.

KT did not let it rest there tho, He asked the PPC if he agreed with Warrington South Labour :


And shortly after the tweet was deleted and Warrington South Labour tweeted an apology :


@Ontablets @daoudmsund we don't, apologise in any offence caused, obviously. Yes if you implement austerity can't just be at the bottom
— Warrington South Lab (@warrsouthlabour) February 3, 2014


KT made a choice not to take "offence" , KT has had much worse said to him over the years but what struck KT was that opposing the bank bailout invoked such a response from a party that claims to represent the working class (remember that labour doubled the 10p tax rate at the height of the downturn ), to suggest one needs medication for holding such views shows how out of touch they are, but more seriously to make light of mental illness in such a way further isolates people with mental illness from the political class.

After all you would not expect a party that wants to be next government to mock people based on race/religion/sexuality, No wonder mental illness is still a taboo subject.....

Note : KT was going to leave it after the apology but decided to blog as he has the platform and if KT says nothing then nothing will change.