" In April 2011, Mr Clegg said any adverts for internships with Liberal Democrat MPs would come with "real support to cover costs" in order to "give new people opportunities to participate in that kind of political activity". 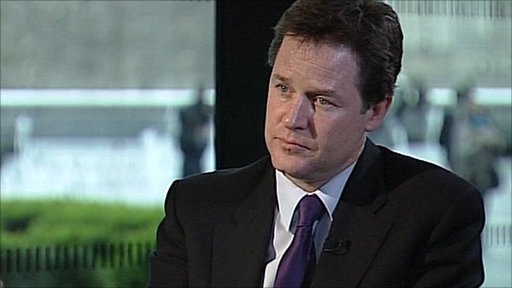 Nick Clegg tells Newsnight in April 2011 interns will be "properly remunerated"
The deputy prime minister said they would "conform with minimum wage legislation as much as possible" - a statement taken by some to mean that all interns would receive a salary."

Ok Mr Clegg , lets hold you to this.

Job Title:
Parliamentary Intern
Working For:
Adrian Sanders MP (Torbay)
Location:
London
Salary:
Voluntary position: lunch and travel expenses provided
Job Details:
Adrian Sanders, Liberal Democrat Member of Parliament for Torbay, is looking for an intern for his Westminster office.
The position will provide an opportunity to gain experience of working in a busy MP’s office and to develop research and press skills. Interns will be able to draft press releases, write correspondence, prepare briefings and carry out other research work.
The successful candidate will be able to benefit from a diverse range of work to suit their interests and professional development, will have access to training and advice for career development.
The successful candidate will have an interest in politics, good written skills and sympathy with the aims of the Liberal Democrats. An interest in scrutinising Government and developing innovative policy would be beneficial.
A commitment of three months is desirable: full and part time applications will be considered.
Upon appointment you will be required to comply with the Baseline Personnel Security Standard, undertaken by the Members’ Staff Verification Office (MSVO). See www.w4mp.org/html/msvo/main.asp for further info.
Closing Date:
15 June 2012
Interview/Start Dates:
Interviews to be held the end of the following week.
Job Contact:
Please send a CV and covering letter to smithtj@parliament.uk
or alternatively post to Adrian Sanders MP, House of Commons, London SW1A 0AA.
Website:
http://www.adriansanders.org

So Nick is that another broken promise?

The link is here to the advert : advert

Just to be clear, i have no problem with unpaid interns. I just don't like hypocrisy!
Posted by Billy Bowden at 02:47