The Green Party like to present themselves as nice and cuddly people, ya know, looking after the icebergs and fluffy killer animals ( something like that) , but it seems that does not extend to humans, this is Green party candidate Trevor Allman supporting an attempt by terrorists to murder a UK Prime minster 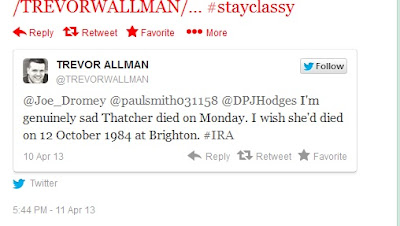 But that is not all

@davidcoburnukip Pity it wasn't her body. Could have strung it from a lamp-post, like fellow Fascist, Mussolini.
— TREVOR ALLMAN (@TREVORWALLMAN) April 13, 2013


@ey1255 @mark__witt I agree Marisha. There are some evil people out there. Thankfully there's one less after Monday.
— TREVOR ALLMAN (@TREVORWALLMAN) April 13, 2013

He might love your wind turbines, but he has zero basic human decency, maybe he and Glenda Jackson  should start a club!

Update : Trevor gets in touch


@ontablets Thanks for the mention. Much appreciated. I've made you all look very silly. Blame @davidcoburnukip for re-tweeting me!!
— TREVOR ALLMAN (@TREVORWALLMAN) April 14, 2013


Update : The London Green party get in touch

.@ontablets Hi Billy, all we can say at the moment is that last night's disputes will be looked into & taken seriously. Thanks.
— London Green Party (@LonGreenParty) April 14, 2013


KT will point out that the original tweet was sent 4 days ago......

Note : KT has been told that the Green Party were not aware of the tweet till yesterday evening, KT looks forward to the outcome of the investigation.

Here are screenshots of those tweets 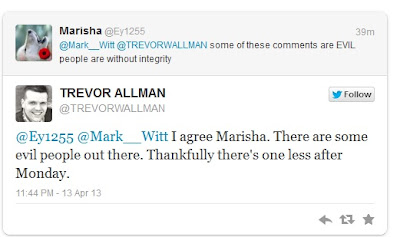 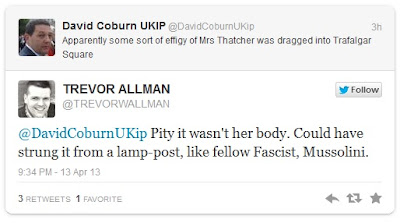