All Bedrooms Are Equal, But Some Are More Equal Than Others

The other day KT wrote about the "Bedroom Tax" , where KT pointed out that Labour introduced the measures in 2008 for private tenants : 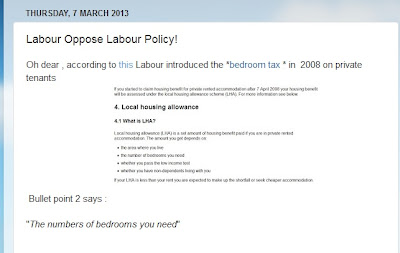 Now when people are proved wrong you expect them to concede the point, however one MP didnt, this was my exchange with Jamie Reed MP the other day on the subject : 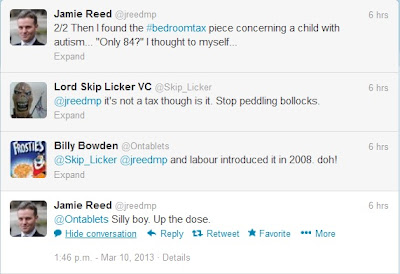 Mr Reed denies they did introduce the "bedroom tax" in 2008, so KT being a nice guy sent Mr Reed this tweet a bit later :

@jreedmp Hi, further to our exchange earlier i thought i would pass this on > disabilityrightsuk.org/f44.htm 4.1 is fairly clear.
— Billy Bowden(@Ontablets) March 10, 2013


It links to this site

I even directed him to the paragraph :

It clearly sets out the "bedroom tax" policy, however! I feel that Mr Reed maybe unconvinced, so I thought I would use a source that is well known to most people , This is from the housing charity "Shelter :

"Local housing allowance (LHA) is the housing benefit paid to most tenants who rent from private landlords.
The amount of LHA you can get largely depends on how many bedrooms your home has, and the maximum rent allowed for properties in your area."

They go on to explain who it applies to and when from :

"Local housing allowance only applies to private tenants who are making a new claim for housing benefit or who made a claim after 7 April 2008."


The amount of local housing allowance you can receive will depend on:
One presumes that includes bedrooms, which brings us on to this :

"When you make a claim for LHA, you’ll be assessed as needing a bedroom for each of the following people in your household:
Sounds fair enough, Then they offer advice on what to do if LHA does not cover the full rent :


Your options could include:
So, we have established that LHA was introduced in 2008 and that it is calculated on rooms you need ( sounding familiar so far), indeed at the time Labour were very supportive of it, the then Minster Stephen Timms said this  :

‘The LHA is a central part of the Government’s wider programme of benefit reform. It’s a radical change to the way Housing Benefit is paid in the private rented sector and will help people take action towards managing their own bank accounts, making it easier for them to move off benefits and in to work."

However just a few weeks ago Mr Timms described it as :

So its perverse to use the same rules on public tenants that are used for private tenants that Labour itself introduced?

Labour cannot say they oppose the policy as they introduced the principle of it in 2008, just remember that when you see them tweet about it.

They really dont get this "One Nation" notion at all.

Note : When reading the BBC piece i came across this :

"The new rules will affect less well-off tenants who are paid housing benefit to help with rent on council housing or housing association properties - but not those renting in the private sector."

That could be because they were affected when the rules changed for private tenants in 2008 maybe?