YI: Change You Cant Believe In

KT got some threats after he posted this post earlier, as readers know KT is nice and fair, yeah KT pokes fun at politicians (if you cant laugh at them then you only cry) but its always done in the right way, anyway KT is going off piste a bit, lets rewind a bit, lets go back to say .... February 10th , that cool?

They are discussing the then UKIP candidate for Eastlaigh Diane James, but then it moves on

As you can see Nigel Farage`s PA and others were bad mouthing Diane James behind her back and then being all nice to her face, even tho Diane came second in Eastleigh people close to Nigel Farage were slagging Diane James of, even after these e-mails YI (Young independence) requested that people vote for Diane James :

Update : While KT was checking this piece out he came across Ms Fullers You Tube page 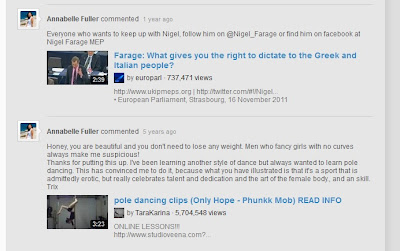