Keep child abuse to yourself? No chance!

Yesterday evening I had a brief exchange with the person in charge of the Standup4Labour , this is the standupforlabour website

Anyway, back to the convo yesterday evening ( its only a few tweets) 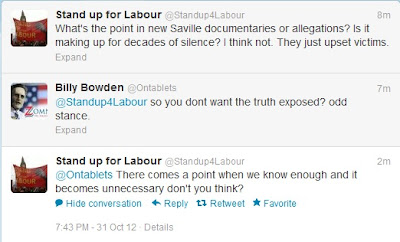 Now lets just bare in mind that there are 300 alleged victims over 4 decades, but then i was reminded of a piece i read other day that had the same kind of line. This piece in the HuffPost by Bendan O`Neill,

"Justice doesn't benefit from these revelations, either, since Savile is dead and cannot be found guilty of anything. It is virtually impossible to prove beyond reasonable doubt that the allegations against him are true, because, in a civilised society at least, the dead cannot be put on trial."

That is correct, Savile is dead and cannot face a judge or jury, and that is the only bit i agree on.

However, since these allegations are so widespread , involving the NHS and BBC (and others) and over such a long time then i think only someone with wrong morals would suggest that we sweep this scandal under the carpet and not want to know the full extent of the Savile (and others) reign of terror, Lets be clear, this is not just hacking someones voicemail this is young vulnerable children being sexually abused! it also involves the cover up of said sexual abuse

According to Janet Street Porter (on Question Time ) last month , everyone knew

If everyone knew and done nothing over 40 odd years over child sex abuse then when does something constitute a investigation?

The other argument of "it will only upset the victims" is complete bollocks as well, let me explain , as i have posted before (and here ) i was the victim of child sexual abuse, whenever i moved to a new area i tried to keep it a secret, why? because i was ashamed, ashamed of me, but i should not have, it took me a few years to cotton on that it was not my fault and that i had  done nothing wrong. Then i started to tell my closet friends and they did not change their opinion of me, they offered me support, the best bit? i felt better , i no longer felt alone, i had finally comes to terms with what had happened, I can now talk about it and blog about it. By keeping it to yourself you bottle up the pain, by doing this (as i did) you turn to drink and drugs, you try suicide, everyday is as dark as the one before  (if not darker ).

This does not mean everything is all rosy tho, i still have bad days and nightmares, but the good days far outnumber the bad, it also took me longer to deal with because i ran away from facing it.

Victims are more upset because no-one done nothing, that they feel they cant tell anyone about what happened to them, that the powerful were allowed to carry on abusing young people.

So i say to those that say "be quiet" or "do we really need to hear this" , how would you feel if it had been you abused and you had people saying you should keep it quiet or let it go? and also would still say the same had this occurred at a Murdoch owned media outlet?

And i say this to those abused, it does get better, talk about it, blog about it, let it out, don't suffer in silence.
Posted by Billy Bowden at 12:37