Galloway : Israel Is A Cancer

After refusing to debate with an Israeli last week George Galloway has popped up again to dispatch his latest piece of advice : 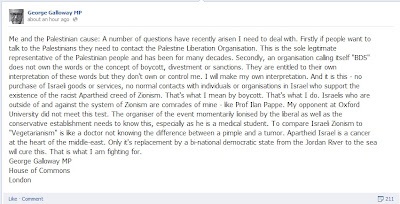 ." Apartheid Israel is a cancer at the heart of the middle-east"

"Fighter for justice, peace & equality for all"

Equality for all unless you are Israeli, which brings us back to when he walked out of a debate last week, in the Huff Post the organizer of the debate says this about the incident :


"I was left humiliated in front of a room full of people who had waited an hour and a half for your arrival, only to be subsequently accused of being deceptive and misleading."

Respect party? Mr Galloway would not know respect if it came and slapped him in the face!