This Wren Catches The Worm

Sir Nick Harvey was shown up for the politician he is by this former Wren :


"A Royal British Legion worker approached a former Armed Forces minister following a Remembrance Day service and 'reimbursed' him for £7.20 in expenses he claimed after attending a previous ceremony.
Fiona Laing, 45, marched up to Sir Nick Harvey, 52, in front of other dignitaries, officials and members of the public, and gave him an envelope containing the money." 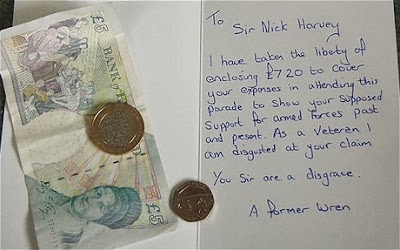 The MP claims it was a mistake saying :

"Had I spotted that individual item I would not have claimed for it, even though it was permissible within the rules.
"Unfortunately I did not notice it: we are all capable of human error and regrettably this was one on my part."

It seems all lot of MP`s make mistakes when filling out their expenses forms, must be something in  the water in the Palace of Westminster.....