While Ed Miliband flip-flopped over Syria last week, On Sunday the Daily Mirror reported this story about Ed and Labour : 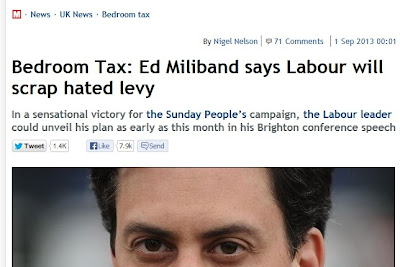 The Mirror quote a party source who says :

"A senior source in the party said: “The Sunday People has run a tremendous campaign."

“Labour WILL repeal the Bedroom Tax. The only question remaining is when."

“But the sooner it’s ­buried, the better. It’s not just cruel and inhumane in impact but it’s ­turning out to be the economics of the madhouse.”

"Seeing families hit by the double whammy of the bedroom tax and a short supply of council property made me examine what went wrong.


Earlier this year former PM Gordon Brown wrote this on his website : 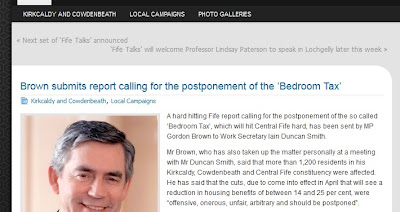 Now as readers know KT dislike politicians, you see when they say something you can be sure that they either have a vested interest in the project or in this case are being hypocrites.

Back in March of this year KT blogged about how the "Bedroom tax " was actually introduced to private tenants on Housing benefit in 2008 , in fact the minister at the time Stephen Timms said :

"‘The LHA is a central part of the Government’s wider programme of benefit reform. It’s a radical change to the way Housing Benefit is paid in the private rented sector and will help people take action towards managing their own bank accounts, making it easier for them to move off benefits and in to work."
In 2008 the PM was Gordon Brown, Ed Miliband was a Cabinet minister and the Daily Mirror was not running a "Bedroom Tax" campaign ( not that KT can find a record of) , KT also recalls that 2008 was the height of the financial crisis yet not a peep from Gordon,Ed or the Mirror.

Opposing a policy that you introduced in government 5 years ago shows nothing but contempt for those that you seek consent from.