The other week KT brought you this story about Trans abuse in Greece : 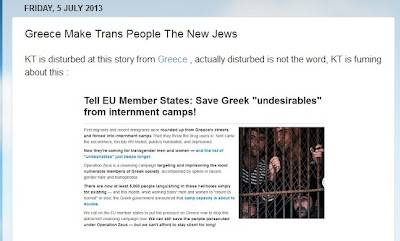 KT himself was horrified and shocked about this and tried to do find out more about this and if possible highlight it, in doing that KT sent the original blog post to Michael Fabricant MP who returned with this reply :

Michael Fabricant (Lichfield, Conservative)
To ask the Secretary of State for Foreign and Commonwealth Affairs what reports he has received on Operation Zeus in Greece; and what discussions he has had with the Greek government concerning the treatment of EU nationals affected by this operation.

David Lidington (Minister of State (Europe and NATO), Foreign and Commonwealth Office; Aylesbury, Conservative)
I have received regular reports form the British embassy in about Operation Zeus and the wider migration issues faced in Greece. The British embassy in Athens has not been alerted to any of EU nationals being affected by Operation Zeus.
Both the Secretary of State for the Home Department, my right hon. Friend Mrs May, and the Minister for , my hon. Friend Mr Harper, have discussed Operation Zeus with the Greek Minister for Public Order and Citizen Protection."

And the other one :


Michael Fabricant (Lichfield, Conservative)
To ask the Secretary of State for Foreign and Commonwealth Affairs what discussions he has held with his Greek counterparts regarding human rights abuses in that country; and if he will make a statement.

David Lidington (Minister of State (Europe and NATO), Foreign and Commonwealth Office; Aylesbury, Conservative)
All EU member states have committed to respecting human rights through the Treaty on EU and the Charter of Fundamental Rights. The British ambassador in Athens regularly discusses human rights with Ministers and senior officials, including issues around racism and the asylum process. In recent months the Greek Government has taken positive steps to tackle racism with the introduction of a directorate within the police force dedicated to tackling racism and legislation aimed directly at combating racism and xenophobia. We also expect Greece's recent efforts to develop further their system of processing asylum to improve conditions for migrants.


KT is still concerned about this story, when a country is in chaos like Greece the rights of minorities can easily be brushed aside!

KT would also like to thank Mr Fabricant for keeping his word and taking time out to ask the minister of this concern (despite this blog publishing Mr Fabricants embarrassing  "Cock Up" the following day), Thank you Mr Fabricant :)