Unless you have been locked in a cave for the last few days you could not have missed the massive scandal of alleged child sex abuse involving Jimmy Saville that is engulfing the BBC, What i have read over the last few days has turned my stomach


But it did seem that one person missed the news of this, The man responsible for getting Murdoch to close down the NOTW over phone-hacking, Tom Watson MP, I expected him to be all over the media demanding answers of who knew what, when they knew and ask them why nothing was done! But nothing!

It seems Labour are still trying to take some kind of moral high ground over this, according to them calling someone a "fucking pleb" is an outrageous crime that should be punished harshly. I have said on twitter and on this blog before that i have heard much worse from Chef in a hotel kitchen, But i do think Labour need to get their own house in order first.

Lets have a look at the PPS to the Shadow attorney general  Karl Turner MP, at the beginning of September he tweeted this 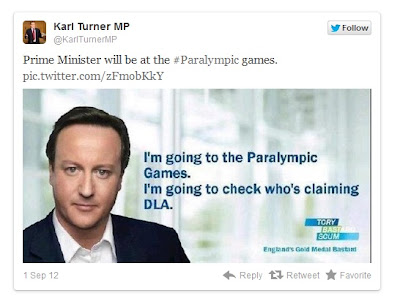 Did we here a peep from the media on this? despite tweeting "Tory, bastard , scum" not a peep, however i pointed out to Mr Turner and he said he hadn't seen it and said sorry ( tho never deleted the tweet) and i said "fair enough" and left it at that. However once Labour kicked up a fuss about this even after Andrew Mitchell had apologized and it had been accepted i felt it only right for them to be held account for not punishing Karl Turner for his tweet attacking Tories as "Tory, Bastard , Scum".

If saying "fucking pleb" is bad then tweeting "Tories , bastard , scum" is no better?

But this is not an isolated incident, just over a week later

But as you can see he said sorry ( again ) 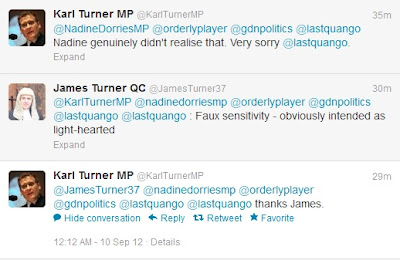 Did he mean it?

You have to remember that an MPs duties is to serve all  voters and not just the ones that voted for him.

We have seen in the two examples that Mr Turner has problems dealing with people that he does not agree with and that when challenged by a young lady he resorts to cheap shots about heather she fancies him.

Mr Turner is also PPS to the Shadow attorney general and we all know that all must be seen equal under the law, If Mr Turner reacts like this when challenged on twitter is he the right person to be a PPS to someone whos work is legal and sensitive matters?

So, here we have two examples of hypocrisy, Tom Watson going after Murdoch outlets for phone hacking yet ignoring a more serious cover up (in my eyes) of child sex abuse allegations at the BBC and then we have Mr Karl Turner who moans about Andrew Mitchell yet does something just as bad himself!

Hypocrisy? You bet!
Posted by Billy Bowden at 17:48