Do you want jobs or not?

I switched of listening to Ed Miliband during his hour long mixture of words, not because of the delivery, that was good ( well up until i switched off) , there was even some good gags , but as soon as he started on his class warfare crap i turned off, Why? well Ed in Government voted to double my taxes and that was an attack on a class, but the working class, so from that base i judge Ed to be full of shit ( bit like 99% of our politicians ). 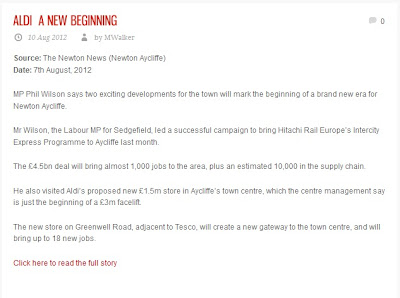 I am sure those on all sides welcome the private sector creating jobs and testing themselves in the market.

However, where there is good practice sometimes you find bad practice

So i had a look on the IPSA site

For those that cant read the bottom line

So with unemployment higher than average Chuka is doing his best to stop the creation of jobs, If his community really don't want a Tesco then no-one will shop there and it will close and Tesco will lose out , the whole risk will be with Tesco.

So when you hear Chuka (who is also Shadow Secretary of State for Business, Innovation and Skills) complain about the lack of jobs remind him that he is opposed to creating new jobs in his own area!
Posted by Billy Bowden at 17:10