I read Georges speech on twitter ( it saved listening to it) as it happened and was shocked when i saw tweets saying that George had said "Workers of the world unite" , after a couple of tweets confirming i asked for the clip so i could listen to it myself.

I had heard this phrase before, but not from original source but from the USA, so i had a look via youtube (as i am sure i had heard it on a American news channel) , well i was confronted by lots of speeches and quotes from Unions, then further down i started seeing links to communist video clips, now feeling even more uneasy i went to straight google search 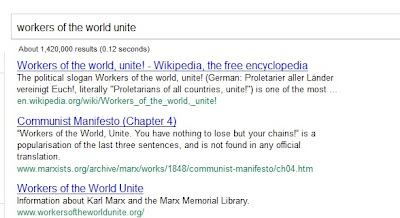 You would think that the Tories would want to encourage people back to the party, however i dont think using words form the Communist manifesto is the way to do it.

If the Tories go any further left they may as well sit with Labour in the House of Commons.
Posted by Billy Bowden at 16:02