You Are What You Mix With

That headline is a sayin from where KT was dragged up, when the news about UKIP Councillor Caven Vines in Rotherham being elected a twitter follower informed me of this (link via Hope Not Hate )

"Caven Vines, 62, used to work closely with the BNP's Rotherham organiser, Marlene Guest, in a campaign group called Council Watch. He has never been a BNP member but spent 2004-2006 as an independent councillor for the Rotherham West ward and is well known locally for his rightwing views."

He goes on to say

"Its about time the Government and the Police stopped pandering to these so called British Muslims and other foreign nationals."

Now as readers will know KT is pro immigration ( link ) , KT does not treat people according to their background, color, race, religion , sexuality and country of origin, KT treats people on merit, to me people are either good people to interact with or bad people to interact with, its that simple, good and evil is not exclusive to one race/color/religion/sexuality etc  a bad person to know hang around with is a still a bad person.

However last evening, in their wisdom the Rotherham ( Rawmarsh ward) electorate decided to elect him : 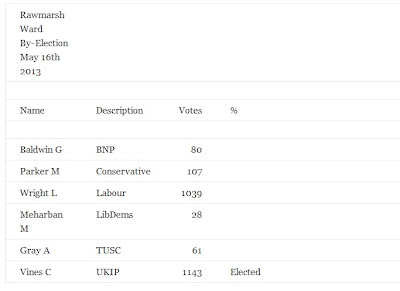 But it gets worse for UKIP, according to the scummy BNP , Nick Griffin said this :

" “By refusing to sack Caven Vines he’s sending out the coded message ‘Don’t worry folks, Ukip secretly agrees with the BNP, but as we’re more subtle about our position the BBC haven’t noticed so we’re not smeared so much so we’ve got a better chance of winning’.