Lets face it, its been a tough few weeks for the BBC, but Thursday they failed again. late night political people would have seen Will Straw on This Week debating an EU referendum, nothing wrong with that, well i say nothing but something did bug me.

According to Guido Fawkes the IPPR got EU funding

Yet this did not get a mention on the show , instead when i put it to the host on twitter this was the reply 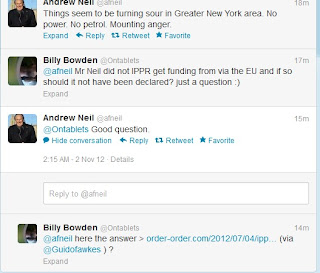 He did acknowledge it a little while later tho

So we can look forward to record being corrected next week then?

Here is the full clip