So as all political people are getting ready to watch the election results this evening and tomorrow morning, so i thought i would bring you this story that claims to predict the winner of the United states of America elcetion :


"The Redskins-Panthers game this Sunday could have quite an impact on Washington's chances in the NFC East while potentially breaking Carolina's season for good. But it wouldn't be surprising to see if President Barack Obama and Republican challenger Mitt Romney keep tabs on the game as well.
That's because the Redskins, in their final home game before voters cast their ballots, have become quite a predictor for presidential elections.
In 17 of the 18 contests in which the Redskins suited up before an election -- beginning in 1940 when the Redskins beat the Steelers and Franklin D. Roosevelt kept his presidency by vanquishing Wendell Willkie -- a Washington victory at home has signaled the incumbent party would keep the White House while a defeat has meant the opposite.
It's called the Redskins Rule, and it's fascinating."

So, what happened then? 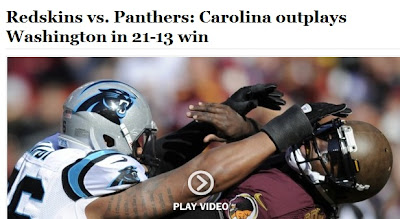