The Cleggster good on delivery, but shit on content


And so today the deputy prime minister gave a speech to his loyal sandal wearers, this speech had a little side event, Harry Cole threatened to join the Lib Dems if Nick Clegg entered of left the stage to the I`m Sorry remix.

Nick Clegg gave a good speech (if you base on delivery ), he came across confident , clear and not to long.

However! On content, the speech was a load of bollocks and i want to pick just two issues out of it to blog about. The first one is debt, according to  debtbombshell our debt will have doubled since coalition came to power

Nick, you nor the coalition are dealing with the debt!

OK, politicians lie and spin, i can cope with that to a degree, but then Nick had the nerve to have a pop at libertarians, he claimed you could as free if more free as a Lib Dem, Sorry Nick now you are proper talking crap!

Remember this moron Nick? It happened on your watch, he got locked up for writing words that others found offensive 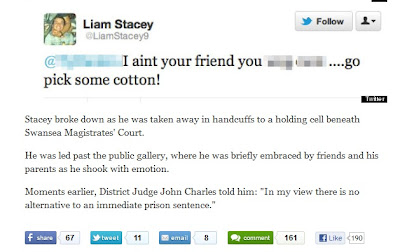 Hey Nick still want to have a dig against libertarians?

You see Nick when it comes down to it actions speak louder than words, and today your words have been found to be bullshit and you actions to be even worse.

But you knew all this anyway.

Video via liarpoliticians
Posted by Billy Bowden at 22:09