In the Sun today they have this story 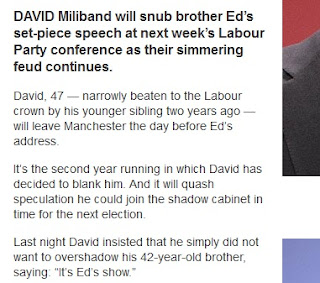 To be fair i am not looking forward to Eds speech either, but remember what was leaked a week or so ago about Eds policy and speech

One thinks he may have to sort out his own relationships before lecturing others on theirs?

My advice (not that Ed will listen) is to say in plain English (human terms) what he represents, He needs to stop putting out silly stuff like "pre-distribution " and "relationship society" and just come out and say that he is a socialist and that if elected to government he will implement a socialist agenda.

But then maybe, this is what happens when you have 3 main parties all fighting over the so-called "centre-ground", If we had a genuine left wing party and genuine right wing party then we could claim to have democracy not this sham we have now.

"If voting changed anything they would ban it"