Putin Has His Knickers In A Twist

According to ITV an artist that painted Vladimir Putin in womens underwear has fled the country :


"An artist who painted Russian President Vladimir Putin and Prime Minister Dmitry Medvedev in women's underwear has reportedly fled the country.
The director of St Petersburg's Museum of Power said Konstantin Altunin had left for France where he plans to request asylum after police seized the satirical and three others yesterday." 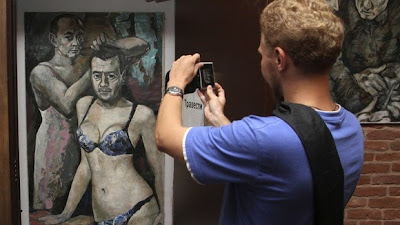 KT thinks they make a lovely couple ;)
Posted by Billy Bowden at 17:44